The LinkedIn IPO on NY Stock Exchange (not the NASDQ) on 20th May generated a frenzy of debate on the front page of business sections. Here are the bare bones of the story:

I, like others eg NY Times' Joe Nocera think that LinkedIn's were (embarrassingly) poorly advised by Morgan Stanley.

This first day trading spike generated lots of chatter about another bubble. Here's the graphic from the Economist article: Welcome to IPOville - Social-media firms see champagne; others see bubbles 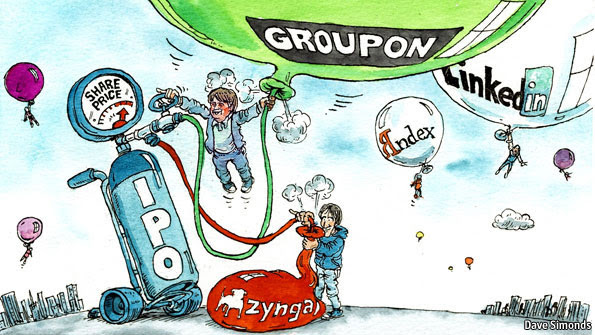 My view from this side of the Atlantic is much more conservative. There are pockets of frothiness, but it isn't across multiple sectors or sustained. Some companies will generate a disproportionate amount of interest (and column inches), but outside of that one company under the spotlight, there isn't tremendous demand pushing up prices across multiple companies.

I agree with this sentiment expressed in the Register: There is no big Silicon Valley tech bubble, says VC king in early May.


Forget what you may have heard: there is no massive tech bubble in Silicon Valley.

Instead there are hundreds of little bubbles, and they're set to begin popping at the end of this year. That's according to investor and "co-maintainer" of the bubble-blowing AngelList, Naval Ravikant.

Fred Wilson of Union Square Ventures expressed it well at the end of April this year in a blog post, The Word Bubble:


But I am equally sure that we are in the glass is half full part of the cycle. Investors are focusing on the upside and ignoring the downside. That part of the investment cycle lasts for a while and then things change and investors focus on the downside and ignore the upside. Markets are defined by greed and fear. We are in the greed mode right now.

Unfortunately, all these column inches will distract lots of people which will self stoke the entrepreneurial / VC sectors into investing in some very questionable businesses and markets.

I envisage danger down the line.
Posted by Arthur at 11:43 am No comments:

Quick Tap is enabled at 50,000 stores in the UK and for purchases under £15. Here's the official press release and their overview page. The introductory video is below.


The Register gives the service a hammering (El Reg pays by phone – mmmm, free cookies! - a strange headline, but it appears that although the Register's journalist munched the cookies, there was no sign of the transaction in Barclaycards's transaction log!).

The poor reviews doesn't fault the payment process (which appears to be seamless /magical), but the initial setup and configuration of the payment mechanism on the phone and then the ongoing account management.


It will be a few months before anyone else commits to using the system, and we're not convinced the infrastructure is quite ready yet despite the point-of-sale process working so well. Proximity payments from phones will happen, and Quick Tap is the first in the UK, but like most first movers it's more than a little rough around the edges.

Posted by Arthur at 9:43 am No comments: