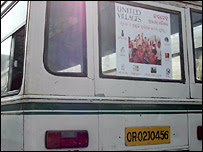 A lovely story from the BBC about cached WiFi intelligence: how, in rural India and parts of Rwanda, Cambodia and Paraguay, the local store has a community computer which gets updated with content whenever a bus (equipped with wi-fi) drives past. The bus connects both people and information requests to larger (connected) communities.

The founder of the United Villages initiative Amir Hassan said:

"0.003% percent of the web that rural India cares about. They want to know the cricket scores, they want to see the new Aishwarya Rai photos, and they want to hear a sample of the latest Bollywood tunes."

It also provides everyone in the rural community with email access too. Users can request specific pages that isn't normally cached. Clearly not designed for personalized services.

OK, so what's the relevance of this heart warming story to the first and second world?

In essence, that most of the internet is asynchronous, so much so that it is (largely) independent of time. So content consumers will use low (or zero) cost communications mechanisms for this type of information and expensive mobile when speed is important or when they lack of access and can justify the expense.

Cisco, mentioned earlier this month, in Social Software goes corporate?, has agreed to buy WebEx, the video conference company for $3.2b.

Lots of people in Silicon Valley are rubbing their hands with glee as Cisco continues to suck up social & collaborative software into into portfolio.

More acquisitions (plus glee) to follow, surely?
Posted by Arthur at 2:27 am No comments:

Vintage stuff: the mighty Gizmo project is revisiting some dusty, long forgotten functionality: the ability to send text messages to mobile phones from a web page for free.

Remember when telco operators used to let any third party do this back 5+ years ago? They permitted this so that the recipient would hit reply thus generating usage. Sadly, only mobile operators themselves permit this through their own sites - and cap usage to a fairly meager daily limit.

It will be interesting to see if this takes off again - perhaps it will shove SMS into the mainstream in the US market.

In the meantime, you can send a SMS to my mobile / cell phone, by clicking on the Gizmo Logo above.
Posted by Arthur at 9:13 pm No comments:

Had another mess around with Jubii. I was hoping the service had improved after its launch a couple of weeks ago. Actually it was the comments in the blogosphere that clarified whether / how some of the functionality worked.

So, it comes from Lycos Europe, it's all Web 2.0:
Several key features are idenabled yet, launching SMS or VoIP is pretty unintuitive. IE7 reports errors from time to time. Overall, some of the concepts that it is aiming for make lots of sense, something that the original Midentity desktop application was aiming for.

It looks reasonably good, but it's buggy - I'd rather not right it off at this point in time - it might be revved up into something reasonable.
Posted by Arthur at 9:07 pm No comments:

Importance of the cost of land on entrepreneurship

One other factor that weighs heavily on entrepreneurship is the cost of land (and therefore the cost of living). The UK is cramped nation of 60 million people - space is in high demand, driving up the cost of land. The US is a vast nation that remains sparsely populated, even with 300 million people in it. The risk of starting a business (and possibly losing your home) is much more significant in the UK than US. For the more extreme contrast, compare with Japan (130 million in a country most mountainous that 75% is uninhabitable).

As a side note, land is more expensive in California than elsewhere in the US, approaching the value in the UK. In my experience, Texas with a reputation for cheap land, hard work and can-do attitude, is much more entrepreneurial than California. Silicon Valley has historically built an innovation cluster (compare with London's financial industry) and now has all the ingredients to make building new high-risk businesses much easier.
Posted by Arthur at 5:36 pm No comments:

Why Britain needs to change its view of entrepreneurs

I find the point of view that UK lacks a culture of entrepreneurship short-sighted - get over it - innovation is a second class career in the UK. This is from a Brit that has bounced between both sides of the Atlantic, who has founded an internet company in the UK, but now lives in the US tech community.

As Napoleon described UK as a nation of shopkeepers 200 years ago, the same is true today. The UK is blessed with historical existence of the City of London, a financial trading power house that generates billions of dollars of value. It's an center of excellence whose contribution to the UK FAR exceeds that of other trading centers of similar size. As a result, the UK (and the Scottish even more so) are supremely skilled in dissecting risk and reapportioning it and trading it. This contribution is something that the UK should be thankful for and, at the same time, recognizes what is disables.

So, imagine I am a bright, young thing in the UK, fresh out of school or university. The most profitable method of being successful is to be drawn to the bright lights of the metropolis and work in 'the City' - where I use other people's money to buy and sell resources and to shave off a commission out of other people's ventures. Would I even consider assuming the majority of the risk of a venture myself? You must be 'havin' a laugh'.

It is well known that immigrants are much more likely to start new businesses for the reasons that they usually lack powerful networks of local contacts and cannot bring an existing reputation in their new country. They rely on their own intuition to build a shelter for themselves and their family.

UK enviously looks over its shoulder to the US, a nation of immigrants with an immense repository of raw commodities and natural resources. It's a nation so large that it can't be dominated by the financial industry in New York (a country can only have one financial center after all). As a result, any bright, hard-working American considers entrepreneurship to be perfectly valid career choice.

Speaking from personal experience, I have found the UK venture community to be superb at quantifying the risk in a start-up business - analyzing it, slicing it and dicing it, synchronizing it perfectly with the rest of their portfolio of investments. They may (or may not!) provide the cash for the venture, but infrequently the practical expertise to assist the new business.

The venture community in the US, on the other hand, provides not only the cash, but also the understanding of the fledgling business (as frequently those with the cash have been successful entrepreneurs themselves, thereby perpetuating the cycle) and are more likely to jump into the ditch and dig or into the boat and row (you chose your metaphor!).

So my answer to British whiners is: if you don't like the golden egg, then kill the goose, otherwise recognize its limitations and be grateful!
Posted by Arthur at 5:23 pm No comments:

A sign of the times, Cisco (yes, those router people) acquires tribe.net, a social networking site. Interestingly, Cisco wants to provide "MySpace in a box for its customers", according a comment from the Head of Strategy and Marketing for the Cisco “Media Solutions Group,” which leading Cisco’s Web 2.0 foray.

Now, this is the first sign that I have seen of social networking (typically the domain of consumers or end users) crossing over into the enterprise arena. Caveat 1: I discount LinkedIn-type services as they aren't 'corporate mandated'. Caveat 2: Corporate wikis not included.

The thinking is that Cisco will now be able to approach any brand and create a social networking site for its brand followers, paid for by the brand.

I have no idea why Cisco is charging into corporate fan sites, either. If you know the answer, then please comment below. Thx.

Posted by Arthur at 4:55 am No comments:

A USA Today article decries the loss of privacy as a result of everyone having a camera phone & the easy ability to publish content.

Far East Asia, then Europe and now the US is realizing the implications of our near 'always-recording' lifestyle in the 21st Century. From 2003, Camera phones banned in changing rooms of leisure centre.

There are positives: at the bottom of the US Today article, it mentions the Dog Poop Girl whose refusal to clean up her dog's mess on the Seoul subway was captured and posted and resulting social shame and capitulation. User generated journalism (most famous being Korea's OhMyNews) and consumer crime prevention (eg text your incriminating photos to your local police station) are other examples.

It is said that you shouldn't put anything in an email that you don't want published on the front page of the NY Times. See this list of career-limiting email blunders (the Claire Swire email, US banker in Korea from 2001).

However, what struck me was that teenagers / early twenties have ONLY lived in an era with the ability to snap 'n' publish content so willingly. Now these students are looking for a job little realizing that all those photos from yesteryear might come to haunt them.

I do think camera phones, the easy ability to post content will make for a cleaner and more just society - it will certainly make things harder to conceal in public.
Posted by Arthur at 3:27 am No comments: