Ofcom's Communications Market Report is always full of stats. Here are a couple that I thought were interesting.

Mail (yes, indeed, this is included in the report!)

Posted by Arthur at 7:23 am No comments:

Ethics of Digital Privacy brings down the News of the World 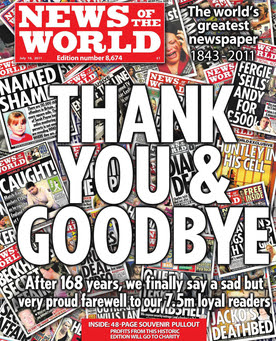 News of the World is a British tabloid newspaper with a pedigree of 168 years. Latterly, it has become known for scoops on gossips and scandals - the private indiscretions of show biz star would be the perfect headline story.

The month of July last year saw the paper commit corporate suicide, as the practice of 'phone hacking' has uncovered to be common place practice.

What is phone hacking exactly?
It sounds very technical. It's not. When you get a mobile phone with voicemail included, you, on your mobile phone, dial the voicemail number (on many phones, the voicemail is dialed by holding down the '1' key), connect to your voicemail service and hear / save / delete messages.

The voicemail service knows that it is you calling, because it recognises the incoming caller ID and bypasses any security.

HOWEVER if you call your own mobile number from another phone and wait for the voicemail to kick in, then you press '#' (usually), you are challenged for your voicemail PIN.

Here's the key: all voicemail operators set their default password to something simple - like '0000' or '1234'. Frequently (and now mandatorily, I suspect), the first time you dial into your voicemail from whatever source, you are required to set a password.

So to hack someone else's mobile number (eg a celebrity's), you would phone their number - at an inconvenient time - eg when they are publicly engaged. If you do get an answer, then you could claim a wrong number. If there was no response or if the celeb was talking on the phone already, then you'd be sent to voicemail. So then you'd try the default passcodes. If the celeb hasn't changed the default password, then you're in! They can still check their voicemail from their mobile and don't know any different.

The first thing that phone hacker do would be to reset the password - so that no other person could get in: other journalists mainly.

The British public became outraged when it was discovered that journalists had hacked Milly Downing's phone. Milly was abducted and subsequently murdered, after a high profile missing persons plea. Milly's voicemail messages were found to have been deleted after she had been reported missing. Her parents thought that it might have been Milly deleting her message, thereby giving her family the false hope that Milly was still alive.

The owner of the News of the World, News Corporation, closed down the publication with its final print run on 10th July 2011.

RESULT: The heritage of 168 year newspaper was destroyed by the abuse of weak identity / password mechanism.
Posted by Arthur at 4:19 pm No comments: