Gatner (they appear to be busy don't they!) states that the number of blogs will peak at 100 million (widely reported, but see BBC summary). It states that 200 million people have already stopped writing their blogs.

So Gartner sees a ceiling approaching. I disagree - I think we'll see an increasing number of people posting online (and not only via the internet, but mobile-based too), but 'blogging', in its current format, implies a continuous stream of thought, expressed freely to all.

But sharing of thoughts and ideas, images and video is both:
As always, the key is who's in the conversation and context & relevancy. Privacy (or at least the reassurance of the availability of privacy) is very important. That's why services like etribes and vox allow you to create 'channels' for you and your colleagues and friends. (An idea that I endorse - hence the domain that I use here: stream121.)
Posted by Arthur at 7:24 pm No comments: 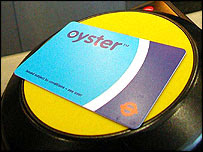 Barclays, the credit card company, will launch a 'wave & pay' card for low value purchases, such as newsagents, pub, vending machines, in late 2007.

For transactions less than £10, card owners will not need to use a signature or a PIN.

For purchases over £10, users will be required to enter their PIN (aka Chip and PIN).

The unique aspect of this annoucement is that the trial will combine the 'wave and pay' card from a bank with the existing and extremely successful Oyster card, the pre-paid contactless card for the London Underground and bus system.

A couple of years ago, insiders tell me that Oyster were threatening to go direct to consumers without the partnership of banks. Fortunately, they have seen sense...

Posted by Arthur at 7:14 pm No comments:

Worldwide SMS volumes will double by 2008, according to Gartner (nice summary here of the report).

Users in Asia will send the most messages, but North America will see the biggest compound annual growth rate between 2006 and 2010, as the medium embeds itself into the daily fabric of life, as it has done in the rest of the world. As a result, North America will become the second most important market globally.

The rest of the article emphasizes that Gartner hasn't seen anything that will push SMS off its perch in the mid-term.
Posted by Arthur at 1:27 am No comments:

Email ThisBlogThis!Share to TwitterShare to FacebookShare to Pinterest
Labels: SMS

But the report sounded a note of caution about the step into people's "digital lifestyles". Ms Srivastava said people were increasingly being tied into the flow of information over global electronic networks and were building a "digital identity".

"As our identity becomes a commodity so does our privacy. And that's where we are entering a dangerous area, making privacy only available at a cost," she said.

One substantial difference between internet and mobile technologies is that mobile phones have known identities (eg caller id and because they are more closely tied to billing relationships). However mobile devices become increasingly internet enabled, this advantage will become diluted.

I fear that it will be parts of the world that are newly enfranchised to the mobile phone that will be most at risk - areas where the mobile phone is likely to give rise to mobile banking industry and where the difference between subsistence and poverty is a fine line.

Actually, if you look at the Slide Show of the report, there are a number of slides on the significance of identity. Worth a read.
Posted by Arthur at 5:22 pm No comments:

Given that 3 is smallest of the 5 operators in the UK and, being a 3G network, needs to differentiate itself, it certainly has made a splash with its announcement of its new X-Series prices. (See my previous comments on why I think its bundling strategies are naive.)

X-Series Gold (£10 per month)
Clearly this is a very aggressive policy - as per my previous comments, this bundling needs to be easy to try, without lock-in. I'd recommend "Free for first 2 months".

Buried in the press release is the announcement that from January 2007, there will be no international roaming voice call charges when using Skype on 3’s networks overseas.
Posted by Arthur at 4:53 pm No comments:

Yahoo provides us with Mixd - a group text messaging service.

Looks very similar to 3Jam (although it allows you to share photos from the phone - nice). See my previous comments on 3Jam. Do you really think consumers are going to be able to master all the commands?

Etribes in the UK has a much simpler and slicker solution.

Posted by Arthur at 4:38 pm No comments:

Google to partner with triple-play BSkyB

Google and BSkyB get together to provide services that blend BSkyB's plays together (from the Times):
Still on the negotation table: BskyB's use of Google Talk and their email service.

This is only the beginning - we should expect more glue between the multi-plays once they have sured up their M&A.

Posted by Arthur at 8:25 am No comments: