Web 2.0 Summit - the Points of Control

Later this month, the Web 2.0 Summit comes to San Francisco. In the pre-conference advertising, the co-chairs, John Batelle and well-known Web 2.0 advocate, Tim O'Reilly, have produced a map of Web 2.0 industry. The theme of the conference is 'Points of Control'.

So by the very title, the organisers believe that the initial period of rapid expansion of the consumer internet is drawing to a close. If true, the organisers believe that existing dominant players are shifting their policies from the the rush-everywhere, hasty land grab to retreat to their strategic power bases to pit themselves against each other in a market that is now maturing.

Admittedly, this Points of Control map and the introductory video (which is very illuminating) can be written off as pre-conference rabble-baiting, I disagree on several points:

Enterprise Participation has only just started
To date, Web 2.0 has been consumer driven. John and Tim rightly point out that big corporates have only just started to engage with the Web 2.0 concept and their audience. This is SO true - there is a huge potential here, which has only just begun: use of social software to interact with consumers over a wider of devices and technologies.

Also, I believe that exciting services from enterprises will drive another growth phase in internet.

Viewpoint is US-centric
In terms of users, the internet is opening up to a vast pool of users who have been denied it to date: BRIC represent a user base to equal the existing user base. The services that they use will not be in the English language. Nor will they access internet services in a desktop manner: mobile (smart) phones, tablets, powerful netbooks.

Summary of the Map
Clearly, this maps was intended to controversial and the authors intended it to generate feedback. Here's my interpretation of the map (with my overlay): 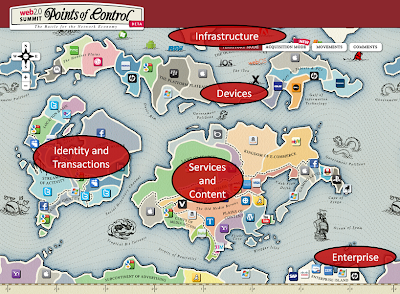 The map can be summarised in tiers:
Interestingly, no mention is made of Public / Government Services, which is another area with oodles of potential.

Update: Speaker Slides and Videos
Posted by Arthur at 10:18 am