The use cases of 4G

In a previous blog post, I laid out the status of 4G mobile roll-out.

Everything Everywhere, the operator with the most advanced 4G deployment has released their 4G Mobile Living Index Report.

Clearly it is brochure bigging up 4G, but my inbuilt skepticism kicks in. Reading the report, there are some interesting snippets:

The key task that has been enhanced with 4G is video streaming (ie downloading). Reading emails, posting on social networks - network speed isn't a major differentiator for these tasks exactly - but network coverage is. However, if you have bought a whizzy 4G phone, then it will have a nice 5Mb / 8Mb / 12Mb camera. If you wish to upload a photo to Twitter (who immediately compress it to <500kb a="" another="" appear="" be="" it="" media="" nbsp="" or="" p="" process.="" site="" social="" tedious="" to="" will="">
What is really interesting is 4G usage for tablets: 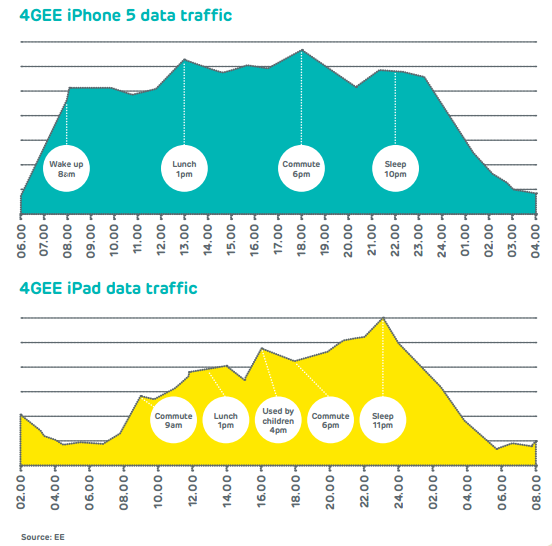 Looking at 4G-capable tablets and smartphones, there is a marked difference in how the devices are being used. Broadly, smartphones match general web browsing usage patterns (see previous page of the PDF Report) and tablets reflect streaming.

It demonstrates how the smartphone on a 4G network is an integral part of daily life, with activity beginning relatively early in the morning and only tailing-off just before midnight. With 4G, the promise of the "always online" generation becomes a reality.

The bottom graph displays iPad usage. It peaks markedly in the evening, highlighting that not only do 4G users like to stream on their tablet devices, but that the tablet is less a feature of the normal working day for most people than the smartphone. There is a small peak around 4pm on the iPad graph that likely indicates children use it either upon return from school or when travelling home.

I conclude that tablets are a leisure device - particularly for junior members of the family. Dad is watching the football on the main TV and the children bounce in between games, messaging and watching a TV programme on their tablet.